Good Monday morning, everyone! Welcome to Nuggets, your Monday morning column dedicated to all things concerning the world’s weekly economic outlook.We hope you had an awesome weekend!

It’s a busy week for markets, so let’s dig in.

In the top financial market news this week, look for the United State’s Federal Reserve’s FOMC minutes set for release on Wednesday afternoon and an OPEC meeting that begins Thursday. A jobs numbers report is expected today.

The dollar continues its now six-month depreciation track after seeing a rally of confidence in late 2016 following the US elections. Speaking of elections, President Trump’s full fiscal year 2018 budget is due out sometime this week.

The depreciation of the U.S. dollar has been bullish for the precious metals market. In today’s spot values, gold is up and silver continues its rise.

Gold is hanging around $1262/ounce (at time of publishing)

Silver is around 17.23/ounce (at time of publishing)

Platinum is at $942/ounce (at time of publishing) 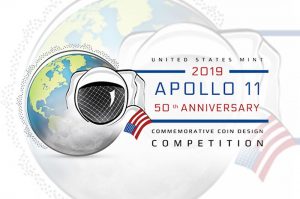 Fifty years after Buzz Aldrin and Neil Armstrong walked on the moon, the US Mint is asking artists to channel that same spirit as inspiration to design the obverse of the Apollo 11 50th Anniversary Commemorative Coin. The public competition is open through June 29, 2017.

Other coins include the usual suspects as well as “one Native American $1 Coin with a reverse design featuring a profiled likeness of Sequoyah writing ‘Sequoyah from Cherokee Nation’ in syllabary along the border of the design.”

In other small nugget news, did you know that America’s coinage was once backed by silver and gold? FDR moved us off the gold standard after the US Depression of 1929. Then, in the mid 1960s, Nixon moved us off the precious metals system for good and we’ve been clad ever since.

Silver can still be found in your change though! Here’s a quick reference to remember.

That’s all for this week’s Nugget News outlook. Have a great week everyone!